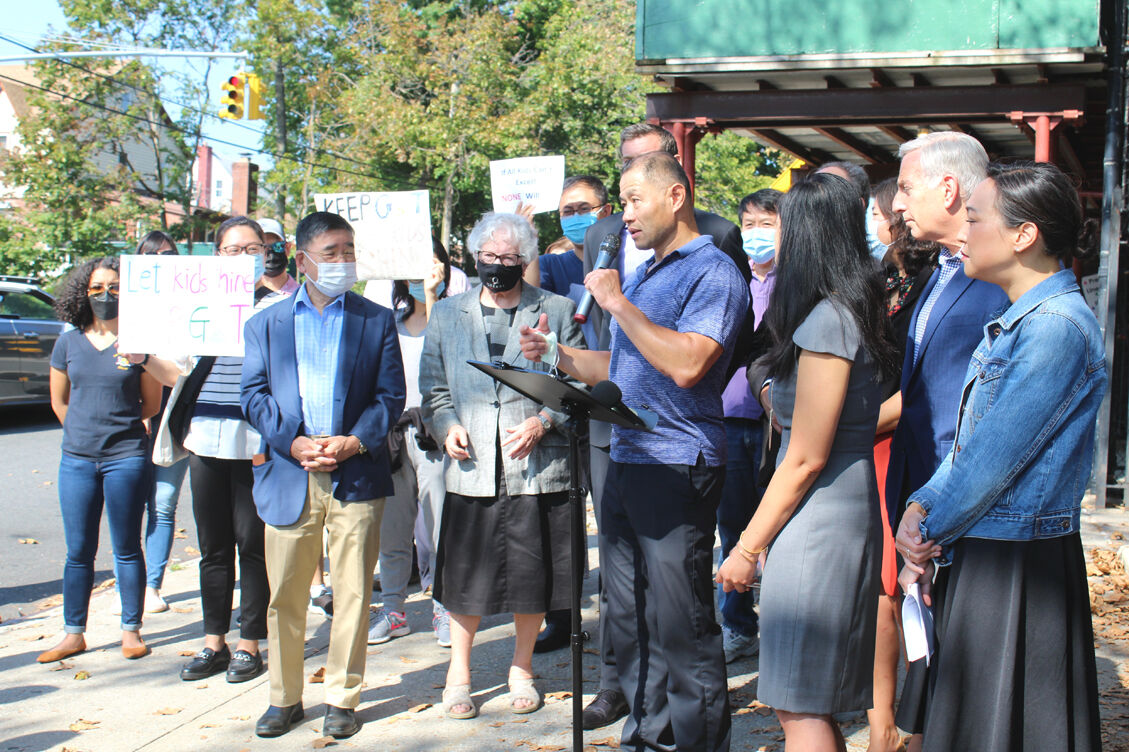 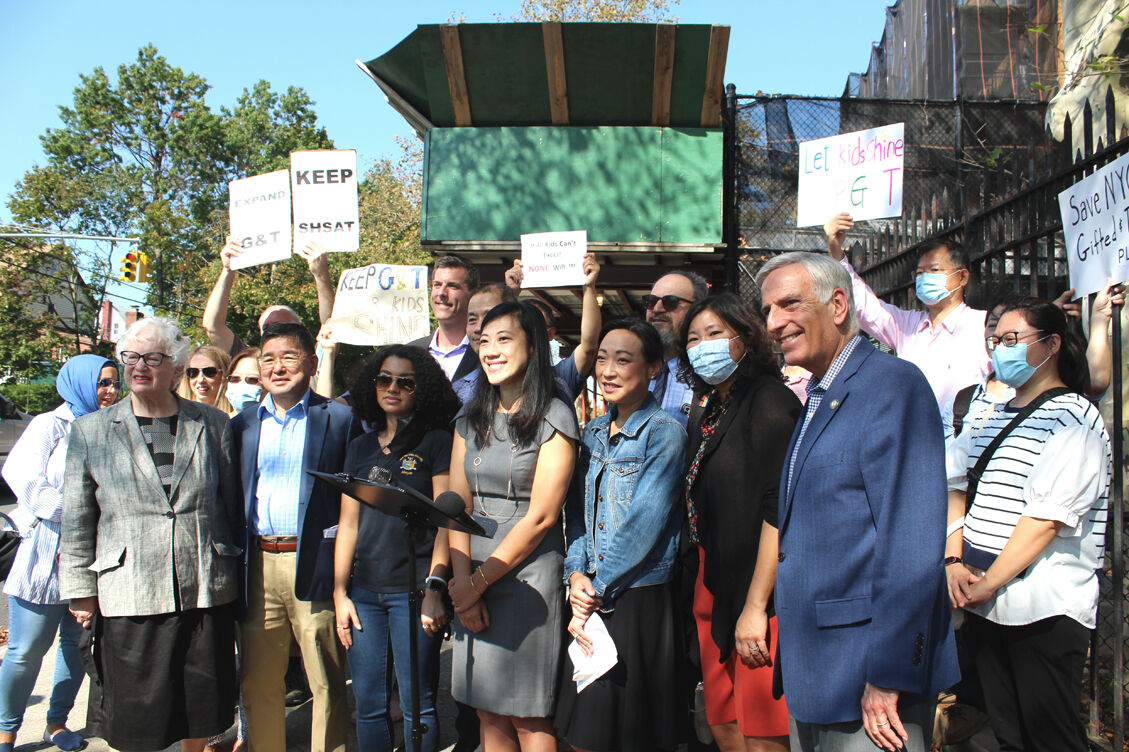 Parents, elected officials and candidates for office gathered to voice their support of the Gifted and Talented program outside of PS 203 in Bayside on Friday.

Parents, elected officials and candidates for office gathered to voice their support of the Gifted and Talented program outside of PS 203 in Bayside on Friday.

Parents and elected officials gathered outside of PS 203 in Bayside last Friday to further protest Mayor de Blasio’s elimination of Gifted and Talented education, calling it “half-baked” and lazy and pushing for expansion and improvement of the program.

“Meaningful parent engagement is vital,” said Cathy Grodsky, president of the District 26 PTA Presidents’ Council. “Looking forward, parents must have an active say in the future of accelerated education in the city.”

“One-size-fits-all isn’t fair to students, nor will it do anything to improve educational outcomes,” said Lee.

The elected officials also criticized the lack of public engagement.

“Once again, the mayor made a major announcement on a Friday afternoon of a three-day weekend. While this mayor has one foot out the door, it is a clearer signal than ever that this is a half-baked plan that should never be served,” Stavisky said.

“Mayor de Blasio would rather go it alone than do the hard work of including parents, teachers, elected officials and the community to create a more equitable system.”

Jie Liu, of Bayside, has a son in third grade at 30th Avenue School in Astoria, which offers a citywide Gifted and Talented program. When she heard the mayor’s announcement, she said she was shocked and wished she had received more information from the school administration about the news.

“If they cut the G&T program, where is my little one going?” asked Liu, who planned on sending her preschool-aged daughter to the same school. “That’s the problem for me,” she said.

She wishes the Gifted and Talented program focused more on reading, she said, but nonetheless, she appreciated that its lessons “go deeper” and provide enrichment assignments.

Greg Comeau runs Greg’s Tutoring NYC and attended the event in Bayside with signs that supported both the G&T and the Specialized High Schools Admissions Test .

“Gifted and Talented is partially random because there’s no G&T formal curriculum. So it kind of gets torn between going faster or going deeper,” he said. “But it’s better than general education.”

Christopher Wagner, an assistant professor of elementary and early childhood cducation at Queens College who served on the Citywide Council on English Language Learners, also believes that G&T programs look different across schools and programs.

“It is supposed to be a modified version of the existing curriculum that is more advanced and that aims to work beyond grade-level standards or expectations. This is very vague,” he said in an email.

He thinks this vagueness is why the mayor’s new plan focuses on teacher training and professional development.

“I would guess that the DOE has recognized this and realized that training and professional development on differentiation is needed to support teachers on how to plan and modify curriculum to meet the needs of different students,” said Wagner.

“Certainly simply giving extra worksheets is not an example of effective differentiation, and is another example of the shortcomings of the current G&T model.”

The officials in attendance praised the program nonetheless and also called for improvements.

“Gifted and talented curriculums have provided students with crucial challenges that help them reach their full potential in the classroom,” said Meng. “Phasing out this program is a mistake.”

“Reforming the process would be the harder choice, and instead of making any adjustments, the City is taking the easier way out by implementing a mass elimination of the program,” said Meng.

Liu, chairperson of the Senate’s Committee on New York City Education and an alumnus of PS 203 himself, recalled accelerated learning programs existing even back then and called the mayor’s plan a “political statement, not anything resembling policy.”

“We need to expand,” Adams said in an interview on CNN last Friday. “The Gifted and Talented program was isolated to only certain communities. That created segregations in our classroom. And then we need to test our children throughout their educational experience, not only at age 4, age 6, age 10. Let’s continue to test them as well.”

Grodenchik said the program is popular in Eastern Queens for a reason. “I understand the need to modify the program to make it more equitable and accessible, but eliminating the program entirely is not reasonable,” he said. “It provides a suitable environment for extraordinary students,” he said. He called the mayor’s plan “dead on arrival,” assuring parents that it would not last. “This plan is going to be killed, I can guarantee you that,” he said.